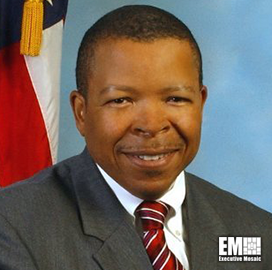 An FBI veteran and a former head of the bureau’s IT programs, he brings into the role more than 25 years of IT transformational experience and leadership.

During his three-year stint, the Redmond-based organization launched a ground station as a service meant to help customers communicate with their satellites and downlink using the Azure cloud platform.

The Azure Orbital GSaaS is designed to help satellite operators schedule contact with their spacecraft and downlink data into virtual networks in the cloud for processing using data analytics, artificial intelligence, machine learning and geospatial tools on Azure.

Before joining Microsoft in December 2017, Searcy served for two years as president for global justice, law enforcement and border security at Unisys. He was responsible for the development and deployment of technology systems that help government agencies to process public safety investigations and border traffic.

He was also in charge of the client IT infrastructure’s cloud migration and the application of predictive analytics and digital government technology to help accomplish law enforcement and border security missions.

Previously, Searcy spent 20 years at the FBI, serving in various capacities. He was a deputy assistant director for the IT infrastructure division, overseeing the bureau’s global information system enterprise consisting of four separate territories at more than 900 sites. He was also responsible for the engineering, maintenance and security of the systems as well as the planning and execution of the $340M budget.

He began his career at the bureau in 2006, serving as an assistant section chief for data acquisition and operational technology. In the said role, he provided daily guidance to five units responsible for developing, deploying and managing the organization’s worldwide digital evidence collection system, including telephony, stored electronic data and digital data network exploitation.

Searcy graduated from the United States Military Academy at West Point with a bachelor’s degree and earned his master’s degree in information assurance from Norwich University.