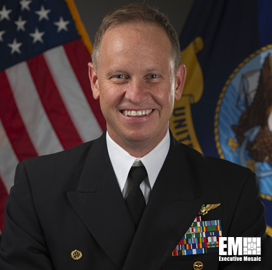 Petrovic’s operational tours include command of the “Mad Foxes” Patrol Squadron (VP) 5 where he led their inaugural P-8 Poseidon aircraft deployment to Okinawa, Japan. He served as the Maintenance Officer of Patrol and Reconnaissance (VP) 45 in Jacksonville Florida.

He also served as a Launch and Recovery Officer aboard the USS George Washington (CVN 73) based in Norfolk, Virginia. Immediately following 9/11, his combat aircrew was selected to support Operation Enduring Freedom and Operation Iraqi Freedom.

His shore assignments include instructor pilot duty with the “Pro’s Nest” of Patrol Squadron (VP) 30, executive assistant in the Joint Chiefs of Staff, division chief at the Undersea Warfare Development Center in San Diego, California, and executive officer of the U.S. Naval Research Laboratory in Washington, D.C.

Petrovic became the 41st commanding officer of the U.S. Naval Research Laboratory on June 25, 2021. He is responsible for overall laboratory management, legal and regulatory compliance, coordinating with other military activities, and supervising the technical work and support services.