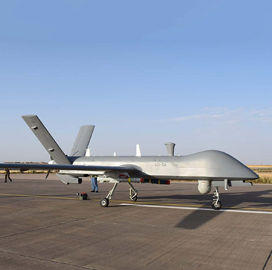 Fielding economically-priced drones alongside a leaner fleet of manned aircraft is crucial to maintaining the U.S. Air Force’s superiority amid the rising threat from peer adversaries like China, according to Air Force Secretary Frank Kendall. He explained that lower-cost unmanned aerial systems would bridge the capability gap created by downsizing the service’s fleet of crewed fighters and bombers, Air Force Magazine reported Wednesday.

Speaking before the Heritage Foundation, a think tank based in Washington, D.C., Kendall said there is a need to acquire uncrewed fighters and bombers to complement the fewer squadrons of crewed combat aircraft that the Air Force will be operating in the future. This signals a departure from the traditional role of drones, which provided mostly reconnaissance and light strike capabilities.

Kendall further revealed that the Air Force plans to buy only 82 crewed aircraft in the fiscal year 2023, marking a significant reduction from the 250 originally planned for the period. Of the total number to be purchased next year, 33 would be Lockheed Martin’s F-35 Lighting II and 24 would be Boeing’s F-15 EX, the latest iteration of the Eagle series of fighters, according to the secretary.

Kendall said that both the F-35 and the F-15 EX cost over $80 million apiece. He added that the envisioned Next Generation Air Dominance fighter and the B-21 stealth bomber will cost the Air Force hundreds of millions of dollars apiece.

In anticipation of rising costs, Kendal said the plan is to maintain half as many crewed aircraft as there were during the Cold War. Meanwhile, the Air Force is asking Congress to approve its highest research, development, testing and evaluation budget ever at $49.2 billion.