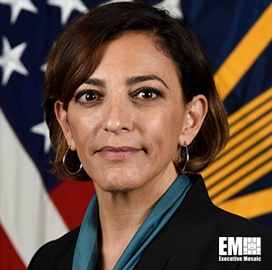 Former Department of Defense executive Katie Arrington, a speaker at a past Potomac Officers Club event, has announced her plan to run for Congress.

Arrington previously vied for Congress in 2018, making the Republican primary but losing in the general election, FedScoop reported Tuesday.

In a Twitter post, Arrington announced that she will again run to represent South Carolina’s first congressional district and address the needs of the state’s Lowcountry.

She most recently served as the chief information security officer in the Office of the Under Secretary of Defense for Acquisition and Sustainment.

As CISO, Arrington was responsible for providing cybersecurity advice and conducting analyses in the DOD’s major acquisition programs.

Arrington was also tasked with providing a central coordination point and common compliance standard for disparate cybersecurity efforts across the department.

OUSD(A&S) was previously the office in charge of overseeing the Cybersecurity Maturity Model Certification program, an effort to raise the cybersecurity standard among defense contractors.

Arrington is credited with using her political skills to promote CMMC, making trips nationwide and hosting Zoom calls to garner support for the program.

Executive Mosaic, POC’s parent organization, inducted Arrington into the 2020 edition of Wash100 in recognition of her impact on the government contracting sector.

Posted on February 9, 2022 by Robert Johnson