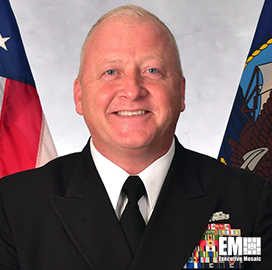 He will take over the role for incumbent MCPON Russel Smith during a change of office ceremony on Sept. 8, the Navy said Thursday.

Honea “embodies Navy values in every fiber of his being, and is the right leader to inspire and motivate our Chiefs Mess to continue to be the best in the world,” Gilday said during a symposium at the U.S. Naval Academy.

According to the Navy, Gilday selected Honea for his experience in leading sailors and advocating on their behalf and their families.

The Navy added that Honea’s fleet experience covers nearly all areas of responsibility, a trait that the service said will help the fleet maintain its competitive advantage.

Honea currently serves as a senior enlisted leader for the U.S. Indo-Pacific Command, a role he assumed in August 2021.

He enlisted in the Navy in 1987 and reported to the USS John A. Moore following the completion of his training. He later held higher-ranking roles aboard the USS Juneau, USS Dubuque and the USS Gridley.

The Navy also assigned Honea as command master chief on the USS Gridley and on the USS New Orleans, according to his USINDOPACOM profile.