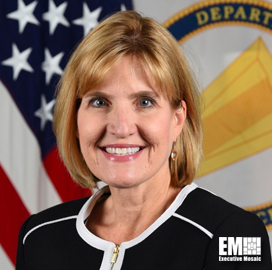 Ms. Megan Dake is the Acting Deputy Assistant Secretary of the Army for Procurement, Office of the Assistant Secretary of the Army for Acquisition, Logistics and Technology (ASA(ALT)). She oversees all aspects of procurement from the acquisition and life cycle sustainment of Army weapon systems, equipment, research and development, test and evaluation, logistics, fielding, and disposition. As the Functional Career Representative for Contracting, she oversees the recruitment, training, certification and professional development of the 8,000+ Army military and civilian contracting workforce, worldwide.
Ms Dake was appointed to Senior Executive Service in July 2020 and was selected to serve as the Senior Services Manager (SSM) and Civilian Deputy of the Office of the Deputy Assistant Secretary of the Army (Procurement). In this role, she provided leadership in the acquisition of Army services and was responsible for a portfolio of more than $200 billion in existing and planned contracts across the Army. She was an integral part in standing up the Army Contracting Enterprise (ACE) that focuses on developing people, integrating relationships, and revolutionizing contracting.
From February 2020 to July 2020, Ms. Dake served as the Senior Contracting Official (SCO) for the National Guard Bureau (NGB). In this role she was responsible for all technical areas of contract execution, administration, and closeout for over 5000 procurements amounting to $1.6B and Cooperative Agreements valued at $2.3B supporting the Joint Staff, and Army and Air National Guard.
From August 2019 to February 2020, Ms. Dake served as the Director of Army Intelligence Contracting under Army Contracting Command supporting the Intelligence and Security Command (INSCOM). In this role, she was responsible for all contracting activities for INSCOM including the National Ground Intelligence Center.
From September 2017 to August 2019, Ms. Dake served as the SCO/Director of Contracts for the Marine Corps Systems Command. As SCO, she led a team of 240 contracting professionals responsible for acquisition planning and contracting for ground weapons and information technology systems programs. During her tenure, she led successful development of the Command’s Long-Range Acquisition Forecast Plans and established the competency’s resource and workload plans to ensure successful execution of these requirements. She revamped the Contracting Officer’s Representatives program improving metrics compliance by 80%, as well as the Contracting Officer’s Review Board program.
From July 2013 to August 2017, Ms. Dake was the Director of Contract Services for the Consolidated Support Services Program for the Missile Defense Agency. She led a large team of contracting professionals in the award of services acquisitions supporting the Ballistic Missile Defense System. She was instrumental in the execution of $2.5B in annual defense appropriations for advisory and assistance services as well over 2700 contract actions valued at $250M in direct support of the warfighter.
Ms. Dake received a Master of Science in Business and Contract Management from Florida Institute of Technology and a Bachelor’s Degree in Human Resource Management from the University of Maryland. She is a graduate of the Federal Executive Institute, Center for Leadership Development as well as the Navy’s Executive Bridging the Gap program. She is married to Michael Dake, a retired Army Officer and Army civilian and has three children, Sarah, Margaret and Thomas.