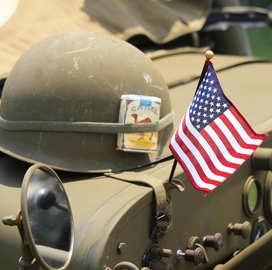 The U.S. government’s defense spending is expected to stay largely stable in 2021 as military programs remain critical to national defense. Deloitte projects global defense spending to cross the $2 trillion mark in 2021 with geopolitical tensions escalating even during the pandemic.

Despite the anticipated budgetary pressures from the federal government’s massive stimulus spending, defense contractors across the supply chain can expect to continue receiving favorable payment terms. According to Deloitte, the $15 billion on-year increase in foreign military sales will likely offset some of the impacts of flat domestic spending. The Potomac Officers Club — a division of Executive Mosaic — features five executives from some of the United States’ premier defense contractors.

Kathy Warden is the chairman, chief executive officer and president of Northrop Grumman.

Warden, a 2021 Wash100 winner, has been with the Falls Church, Virginia-based aerospace company for 12 years. She has held other leadership positions, including chief operating officer and corporate vice president and president of Northrop’s mission systems and information systems sectors, according to her company profile.

Her LinkedIn profile shows that she also served as senior VP and general manager of the company’s cyber intelligence division, as well as VP of cyber and signals intelligence systems.

In addition to leading Northrop, she sits on the board of directors of Merck & Co., Inc. and Catalyst. She is also the vice chairman of the Greater Washington Partnership and the James Madison University Board of Visitors.

Previously, she worked for General Dynamics. During her four-year stint with GD, she was appointed VP of intelligent systems and director of intelligence mission solutions.

She also spent four years at Veridian, where she served as SVP of the enterprise systems sector.

Tracy Atkinson sits on the board of directors of Raytheon Technologies, where she serves as chairman of the compensation committee.

Atkinson has been a part of the Raytheon board since 2014, prior to the company’s merger with United Technologies Corporation. As a board member, she brings expertise in accounting, finance, risk management and regulatory matters, according to her company profile.

For the past 10 months, she has also been a board member at Affiliated Managers Group, an investment management company, and US Steel, an integrated steel producer.

She is also on the board of directors of The Arc of Massachusetts, a nonprofit dedicated to helping people with intellectual and developmental disabilities and their families.

Previously, she was an executive vice president at State Street. During her 12-year career at the financial services company, she also took on several senior finance and risk management positions and served on the company’s management committee.

Earlier in her career, Atkinson was appointed as chief risk and new product development officer and chief financial officer at MFS Investment Management.

She started out as a partner at PricewaterhouseCoopers, a global network of firms providing assurance, tax and consulting services.

Atkinson completed her bachelor’s degree in accounting from the University of Massachusetts and went on to become a certified public accountant.


Lawrence Kellner, Chairman of the Board at Boeing

Lawrence Kellner has been serving as a member of Boeing’s board of directors since 2011 and as non-executive chairman of the board since December 2019.

According to Boeing, Kellner’s appointment as non-executive chairman was part of a leadership shake-up aimed at improving transparency and communication with regulators and customers.

Boeing said Kellner brought with him a deep understanding of strategic planning, customer requirements and operational management in the airline industry.

Kellner is currently the chair of Boeing’s governance, organization and nominating committee and is a member of the company’s aerospace safety committee.

Boeing established the aerospace safety committee in August 2019 and made it responsible for ensuring the safe design, development, manufacture, production, operation, maintenance and delivery of the company’s aerospace products and services.

Kellner previously served as the CEO of Continental Airlines, a global airline that prides itself in having strong training programs and strong coordination among pilots, civil aviation authorities and other internal and external stakeholders.

He also has detailed knowledge in finance and accounting from his tenure as chief financial officer at Continental Airlines and American Savings Bank, according to Boeing.

He has expertise in corporate governance from his service as lead director of Marriott, as former chairman of Sabre and his membership on the boards of other Fortune 500 companies, Boeing said.

Since 2010, Kellner has been serving as the president of private equity firm Emerald Greek Group.