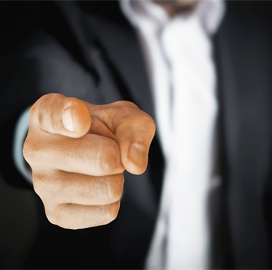 The emergency preparedness and risk management community is responsible for mitigating the impacts of both natural and man-made disasters.

Over the last couple of years, the United States’ preparedness capabilities were tested by one of the worst wildfire seasons in history in the American West, a record-breaking hurricane season in the East, civil unrest and mass shootings, according to the Federal Emergency and Management Agency.

The coronavirus pandemic also profoundly impacted the landscape of emergency management and disaster response, forcing the community to adjust to restrictions for in-person contact, FEMA said in a December 2021 report.

Liam O’Keefe is the lead official for disaster operations and crisis management at Hagerty Consulting. He has been holding his current leadership role since 2012.

The disaster preparedness veteran was a former director of emergency management at the City of Philadelphia. In this leadership role, he oversaw the transformation of Philadelphia’s emergency management program and systems. He led the creation of administrative infrastructure, managed workforce expansion efforts and oversaw the acquisition of emergency response technologies and equipment.

O’Keefe served as a management consultant to the Department of Homeland Security and the Federal Emergency Management Agency. He worked on 10 major disaster declarations, including the World Trade Center terror attack, hurricane Katrina and super typhoon Paka in Guam.

He first joined Hagerty in 2003 before moving to different organizations and finally settling with the consultancy firm in 2012. He started his professional career in 2001 at the New York City Office of Emergency Management.

Hagerty holds a bachelor’s degree in psychology from the College of the Holy Cross.

Hagerty Consulting offers preparedness, response, recovery and mitigation and resilience services to government, public health, transportation and other critical markets. It is headquartered in Evanston, Illinois, and has multiple offices across the U.S., and one in Puerto Rico.

Paul Conboy is the director of crisis management at London-headquartered PricewaterhouseCoopers, working out of Arlington, Virginia. During his many years on the job, he has been appointed to develop strategic responses for ransomware attacks, hurricanes, the COVID-19 pandemic, the Northern California wildfires, and one of the largest corporate bankruptcy cases in United States history, according to his LinkedIn profile.

By his own account, Conboy is an “operationally oriented strategist and leader who can accelerate high-yield solutions to complex business challenges.” He further described himself as a transformational influence in building operational processes and organizational solutions that strengthen the corporate value and market impact.

Conboy has been employed at the multinational audit firm PwC for 13 years. In his current role, he develops enterprise-wide response strategies and governance models as well as designs decision frameworks and supporting analyses. He is credited for defining the firm’s COVID-19 crisis response strategy and has led crisis support in response to Hurricanes Harvey, Irma, and Maria.

Conboy earned his bachelor’s degree in accounting from the University of Richmond – Robins School of Business.

Kevin Wilson is the director of the Preparedness and Resilience Division at Virginia-based Dynamis, working out of the Washington-Baltimore Metropolitan Area. He is a security and emergency management professional with over 20 years of experience in program management, technical writing and emergency response planning and operations, including six years as a commanding officer in the fire service, according to his LinkedIn profile.

Wilson has managed teams within the Cybersecurity and Infrastructure Security Agency, Federal Emergency Management Agency, Transportation Security Administration and the Department of State’s Office of Emergency Management. In addition to his government experience, he is the former department chief of the Stonewall Jackson Volunteer Fire Department & Rescue Squad and former vice chair of the Prince William County Fire and Rescue Association, where he was responsible for the oversight and management of over 100 operational and administrative members, his biography further reveals.

Ashlee Delventhal is the senior director of preparedness, resiliency and emergency management at Tidal Basin Group. She has been with the disaster preparedness company for over two years.

She was the director of preparedness, resiliency and emergency management at Tidal Basin before taking up her current leadership position. As director, she was responsible for providing planning, training and exercise and other collaborative initiatives to transportation and critical infrastructure clients and other government organizations, according to her LinkedIn profile.

The industry veteran also handled leadership roles at government agencies. She was a deputy planning section chief at the New Orleans Office of Homeland Security and Emergency Preparedness and was a planning specialist at the Federal Emergency Management Agency.

Delventhal holds a master’s degree in applied aviation safety from the Florida Institute of Technology and a bachelor’s degree in emergency management and homeland security from Jacksonville State University. She is also a certified member of the American Association of Airport Executives and was issued an emergency manager certification from the International Association of Emergency Managers in 2019.