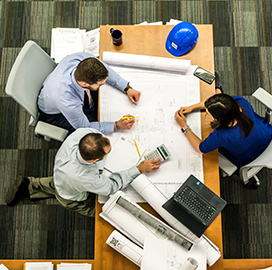 Business trends like rapid globalization and organizational complexity have made it difficult for CEOs to stay on top of everything, even areas as important as strategy execution. Harvard Business School professor Joseph Bower said that top-level executives cannot maintain iron-fisted control over strategy as line managers seek to define strategies on their own.

Companies, therefore, have begun creating roles dedicated to developing and executing a company’s strategy. Strategy executives come in many names and titles, but they have the commonality of being chiefly responsible for ensuring that the company’s decisions remain in line with its overall strategy.


Roy Stevens, EVP for Business Development and Strategy at Leidos

Roy Stevens, as Leidos’ executive vice president for business development and strategy, oversees all aspects of business growth across the company’s portfolio.

With a presence around the world and across the federal sector, the Virginia-based defense contractor provides various IT services to areas including defense, health care, intelligence and space, according to his LinkedIn profile.

Bringing into the role about three decades of experience in the aerospace and defense industry, Stevens also leads the organization’s account management, marketing, communications and U.S. government legislative affairs and directs the company’s long-term growth, including the development of strategic plan and vision.

He manages a team that focuses on high-win rates and above-market organic growth to expand the company’s market. Under his leadership, the organization handles a $160B pipeline and annual contract awards worth more than $17B.

During his tenure, the company secured a $292M contract from the Federal Aviation Administration for the development of a scalable, cloud-ready system capable of displaying essential weather, aeronautical and National Airspace System information.

Nadia Short, a two-time Wash100 winner, is vice president for strategy and business development at General Dynamics Mission Systems, leading the company in growth and capital strategies and business-capture development.

Prior to the role, Short served as vice president and general manager for the cyber systems business area, in charge of developing comprehensive cybersecurity network and infrastructure services for defense, intelligence, homeland security communities and commercial customers, the company said.

During her tenure, the company partnered with Dedrone, an airspace security company, allowing the GDMS global network access to its drone technology.

The partnership enables early warning, classification of and mitigation against drone threats in support of customers in the military, allied nations, correctional facilities, airports, utilities and corporations.

Previously, Short was the director for strategy and business development in the organization’s information assurance unit.

She also served as the director for emerging business-capture in the communication networks division, spearheading the initiatives for the U.S. Navy’s Automated Digital Networks System Increment III. Other program captures were the Army’s Warfighter Information Network-Tactical program and the Key and Identity Management Increment II program for the National Security Agency.

Before joining GDMS almost 25 years ago, Short was a chief warrant officer in the U.S. Army Signal Corps, overseeing the planning and operation of tactically deployed secure voice and data networks.

She was given in 1991 the Bronze Star medal for her service in Operation Desert Shield/Desert Storm.

During his tenure, the company was chosen as the NVIDIA Partner Network‘s 2019 Global Consulting Partner of the Year for the Americas, marking the third year in a row for the Virginia-based defense contractor to receive the award.

In a statement, the organization said it was recognized for its promotion of artificial intelligence adoption across the federal government. Booz Allen’s partnership with NVIDIA plays a significant role in delivering AI technology to clients.


Adam Harrison, VP for Strategy and Corporate Development at PAE

As PAE’s vice president of strategy and corporate development, Adam Harrison brings into the role his expertise on organic and inorganic growth to support the organization’s current and new plans of expansions and acquisitions.

He has over 10 years of experience in corporate strategy, market research and mergers and acquisitions for the government services industry, according to his LinkedIn profile.

Under the IDIQ agreement, the contractor was awarded an initial five-year task order worth $84.3M to help provide helicopter maintenance for training missions facilitated by the Air Education and Training Command at Kirtland Air Force Base in Albuquerque, New Mexico.

In May, the service awarded the company a potential $158M contract to manage aircraft and equipment maintenance in support of the 96th Test Wing missions at Eglin Air Force Base, Florida.

The contract includes a one-year base performance period, six one-year options and a potential six-month extension. The organization is tasked to provide the personnel, equipment, logistics and technical support needed to repair, maintain and modify F-15 and F-16 fighter jets, among other aircraft.

Before joining the company in January 2020, Harrison spent almost eight years at Renaissance Strategic Advisors, serving in various positions of increasing responsibility. His most recent role was principal, leading teams on over 100 strategic engagements for aerospace, defense and government services clients. He was also responsible for the due diligence assignments across various government services M&A transactions valued up to $10B.

Harrison earned his bachelor’s degree in finance from the Pennsylvania State University and his master’s degree in business administration from the Robert H. Smith School of Business at the University of Maryland.


Evan Lee, VP for Strategy and Modernization at ICF

Evan Lee has been serving as ICF’s vice president for strategy and modernization since October 2018, responsible for the digital transformation plans and efforts of the company’s public sector customers.

He is tasked with overseeing the development of federal growth strategy that uses the organization’s technological capabilities and market experience to provide services and platforms to clients, according to his LinkedIn profile.

In his recent opinion piece, he said the U.S. inspectors general must carry out an “oversight toolkit” of technologies to help monitor the government’s COVID-19 initiatives.

In particular, the IG offices in charge of managing the Coronavirus Aid, Relief and Economic Security Act funds must deploy the toolkit to accelerate IT implementation to enhance collaboration, he wrote.

According to Lee, the toolkit must enable the recently established Pandemic Response Accountability Committee and Special Treasury IG to speed up fraud detection, improve the management of reporting information, advance technology reusability and promote transparency.

He noted that while the Office of the Inspector General supported the deployment of new technologies such as predictive analytics, machine learning and artificial intelligence, the OIG offices with the latest digital capabilities must share the infrastructure, platforms and application code across the federal government to establish foundational services.

Before joining ICF, Lee was the chief technology officer at the Health and Human Services-OIG for over two years. He was responsible for helping the agency use industry IT practices and emerging technologies to improve capabilities in countering fraud in and misuse of the organization’s $1.3T assets.

During his tenure, he led a team that focused on establishing digital service, executing federal mandates for IT modernization, data accountability and transparency and developing a modern workforce, the company said.

Earlier, Lee served as vice president for technology at PeopleClues, a startup that specializes in enhancing personality, cognitive and attitude assessments for hiring, training and employee development.

He graduated from George Mason University with a bachelor’s degree in computer science and holds a master’s degree in IT management from Capella University.

Posted on December 1, 2020 by Robert Johnson